A story of goodbyes

While preparing for both TEDx and the ATD conference in Denver, I’ve been sharing quite a few of my thoughts on the future of work and talent. At the personal core it will end up as a story of goodbyes. I’ve had the privilege to work for most the Dutch banks in the previous decade and I’ve made friends and acquaintances there along the way.

The Dutch banking sector is being hit hard since the onset of the financial and economic crisis and about 100.000 people have since lost their jobs. The bank I have a deep resonance with because of their historic roots in ending poverty in Western Europe almost two centuries ago, is being hit hardest. The Rabobank alone will have to say goodbye to 30.000 of their colleagues.

At first blush the reason for all these goodbyes is the financial and economic crisis, wouldn’t you think so too? And it is, but only partially. In tandem we’ve seen the onset of mobile banking and the closure of most of the physical banking outlets. In other words: the banking industry is being disrupted by technology in a major way. First Direct in the UK, founded only a few years ago, was an early warning of things to come for the sector. This bank has no outlets, just a website, mobile Apps and a call-center. 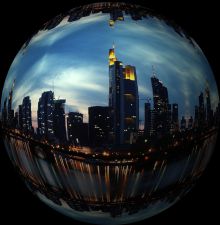 The Fourth Industrial Revolution, the Second Machine age, it may have sounded abstract to all my friends and acquaintances in banking, until it hit them. Until they got the message that 40% of HR at Rabobank will be loosing their jobs. Until some of the best and brightest I’ve known will hit the labour market with a massive number of their colleagues. Will John, Paul, Mary and Clive find new roles for their passion? I pray they do.

But, couldn’t we have known? Couldn’t we have predicted? Couldn’t we have acted sooner to prepare these bright minds for the termination of their jobs? Couldn’t we have helped them re-skill yesterday to ignite new passions in their lives for tomorrow? In hindsight I think we could have: I even think we should have. Why didn’t we do it? In Europe after the second World War when millions lost their lives in concentration camps, people often said: “we haven’t known”. Are we, almost a century later, with all the information we have at our finger tips, still living in this age of ignorance?

Join me in Denver for my passionate plea to innovate talent.