"The great Greek philosopher and scientist Aristotle wrote in 350BC that women have fewer teeth than men. Today we know that this is nonsense. But for nearly 2,000 years it was an established fact in the western world. Then someone, someday had a revolutionary idea: Let's count them! (...)

Is it possible that our current worldview limits the way we think about organizations? Could we imagine a stronger, more inspired and more meaningful way of working together, if we could just change our belief system?"

This question was the key theme for the Forzes | Open Network Meeting on January 9 2017. Forzes is a network of self-employed professionals in organizational change and learning & development. ROI on Talent is one of its brands and I’m a partner in the Forzes network.
On January 9, we invited four speakers to introduce our network and 40 of guests to Laloux’ way of thinking and perceiving organizations. Two speakers represented organizations that had made the transition to teal, the self-directed, stronger and more inspired and meaningful way of working Laloux proposes. They were accompanied by two speakers who work as self-employed change consultants on new ways of working and organizing.

It is my honor to introduce Arthur. 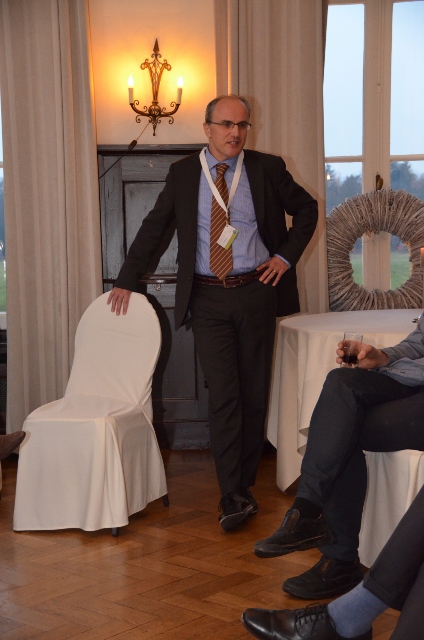 Arthur Cremers, Town Clerk/General Manager of the municipality of Hollands Kroon, likes to call Hollands Kroon a “Tinker Bell” community. Hollands Kroon is a young community in the northern part of Holland, and exists of 22 hamlets and villages.
The communal organization was established on the 1st of January in 2012, through the merger of the former countryside communities Anna Paulowna, Niedorp, Wieringen and Wieringermeer. During this merger, Hollands Kroon decided that things can, may and have to be handled in a different way.
The municipality has transformed itself into a team organization, without external hire or help. In 2012 management decided not to pilot: “we’re going to do it”. The project took 2½ years, and the implementation was 100% customized for each team. The municipality now consists of 37 self-directed teams with a board of only three managers / directors.

As Arthur likes to say, management is required for the frames (the municipality has 16: the corporate identity is one of them), coffee and salaries. When results are good, autonomy of the teams is maximized. Teams set their own tasks and targets with the board. They autonomously decide how they wish to execute their jobs, hire colleagues and set budgets. They get a lot in return for this responsibility: freedom and space. Approximately 10% of the employees have not been able to embrace this new way of working and have they have found satisfactory work elsewhere. The rest of the employees flourish.

Hollands Kroon is now a community where passports are delivered at home or at work, for free. Where employees closely cooperate with citizens, companies and organizations. A community without managers, but with self-regulating teams with great responsibility. Where employees decide for themselves how to use their budget for education and development. Where trainees are selected via ‘The Voice of Hollands Kroon’. Where steering of results is handled through the app “Valued through Results’, without any manager in the loop. And leave? This is also the own responsibility of the employee.

- The organizational costs have decreased significantly (less personnel and staff)
- Employee satisfaction is high
- Absenteeism is low
- Customer satisfaction is high, due to the enthusiasm of employees
- New initiatives pop up, that management could not have foreseen nor initiated