‘Teal’ has a long evolution

Forzes is a network of self-employed professionals in organizational change and learning & development. ROI on Talent is one of its brands and I’m co-founder and partner in the Forzes network. On January 9, we invited four speakers to introduce our network and 40 of guests to Laloux’ way of thinking and perceiving organizations. Two speakers represented organizations that had made the transition to teal, the self-directed, stronger and more inspired and meaningful way of working Laloux proposes. They were accompanied by two speakers who work as self-employed change consultants on new ways of working and organizing. It is my honor to introduce Heleen. Heleen Kuiper started her workshop explaining that Frederic Laloux writes about what she herself already does in her work. In this, she uses the ‘colour’ classification of the evolution of organizations by philosopher Ken Wilber.
In his book, Reinventing Organizations, Laloux describes the development of organizational structures in history, including paradigm shifts, based on the ideas of, among others, Ken Wilber. Each colour represents a certain stage and its associated cognitive, psychological and moral features. The final stage is what is known as the ‘teal’ organization.

At Laloux’s ‘teal’ stage, individual and collective motives come together for the first time. Teal is about awareness of the possibilities that arise if we can unite the need for collective frames and individual responsibilities. 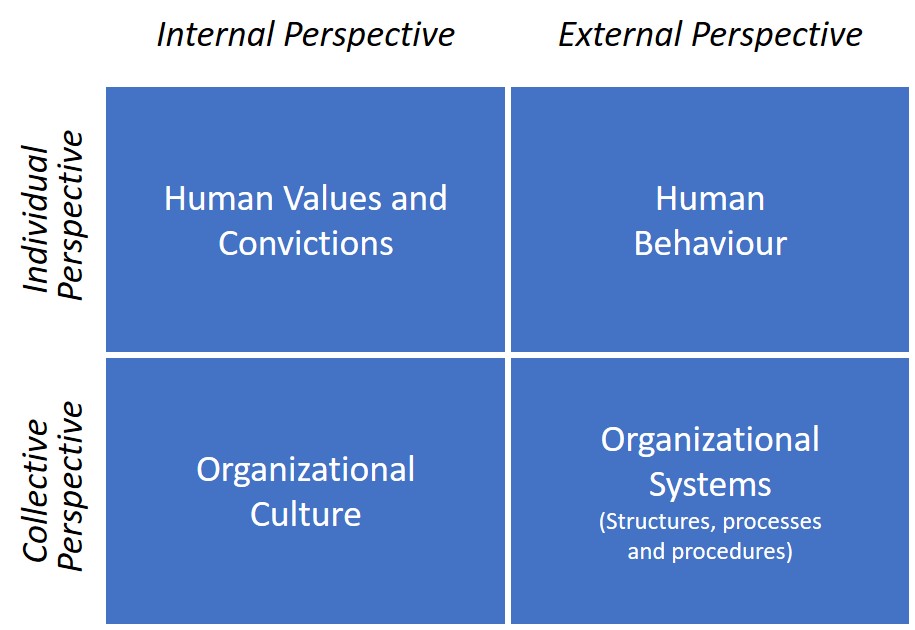 Change can only arise if you have knowledge about the organizational assumptions that colour our society. Organizations are composed of people with ‘coloured’ visions about how the world works. Wilber’s integral way of thinking is a useful tool to help us pay attention to the dominant points of action for change (organizational culture and organizational systems), plus human values and behaviour. Taking every quadrant into account during a change will offer a greater chance of achieving a sustainable effect.
Using a short questionnaire, Heleen took us into the world of successive ‘colours’ in the evolution of human beings (and so their organizations):

According to Laloux, a teal organization is characterized by three break-through features: self-organization, wholeness and an evolutionary goal. Self-organization means that employees are motivated by each other and themselves, and therefore work from a point of trust. Hierarchy disappears. Wholeness means that the entire person gets involved during the job or the project. Everyone will be able to contribute in their own way, and so be themselves. The evolutionary goal lets the organization grow and adapt, without committing it to a fixed direction. The organization is a living organism and must be handled as such. This is contrary to the idea of an organization as a machine, the metaphor ascribed to the orange phase.
Heleen made it quite clear that in real life organizations will never only be teal. Inherent in the evolutionary way of thinking, is that each higher level of organizing also contains the lower ones. This became obvious during a lively exercise where participants could literally take their place at one of the colours where they felt at home, or indeed those they felt ‘allergic’ to.

During the discussion, it was not only questions about the relative advantages of teal that arose, but how to bring people with convictions from other paradigms into the teal movement, without robbing them of their characteristics and added value.

Which is a distinctively teal sort of question…