It seems that working and learning have become two separate worlds. Conference and training centers are fully booked with people that go off-the-job to learn something that they have to apply on-the-job. This learning transfer is impossible, unfortunately, as neuro-science shows us.

From a historical perspective this dichotomy between learning and performing is even stranger, let alone not very fruitful. Even Michelangelo, lauded as a natural talent upon finishing his first masterpiece, had been in a guild for eight years. Learning, teaching, working and performing. Not separate, but integrated: fused, merged. 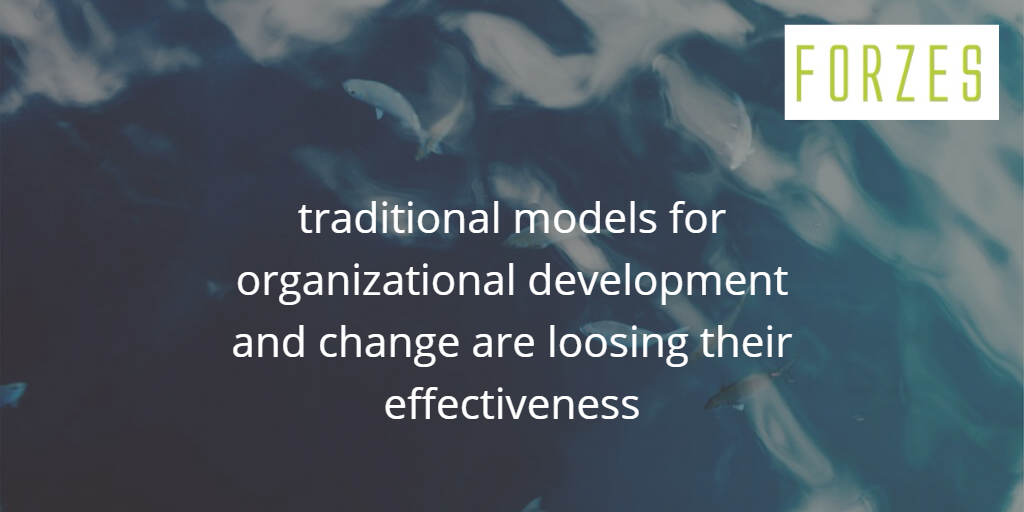 Zoom out on this view and the picture becomes even more intriguing. As the pace of change and globalization speeds up, traditional models for organizational development and change are loosing their effectiveness. Where we often were able to picture the ‘to-be’ as clearly as the ‘as-is’ and the way forward as a straight and narrow path, things have become a bit too dynamic for traditional navigation methods, haven’t they? For one thing our work is becoming increasingly digitally augmented. A simple sentence, but the implications are major. There’s nearly no organizational development possible without an IT-component. And we all know how well those implementations go, don’t we?

The tenet of the issue I would like to address is this: “in our past we were able to address each and every eventuality, work on all conditions before we embraced new ways of working”. What if we simply started working at the onset? Even with haphazard processes, tools and skills that aren’t up to par: yet. What if we used the entire change population as change agents?

Sure, this would require a far more merged approach to learning and performing then we’re used to. KPI’s we can learn into. Processes and tools that are incrementally developed and used as soon as they’re minimally viable. Managers and organizational structures that are finalized to the requirements of the work, as much as to those of management. Strong support for managers, leaders, staff and employees: socially, individually, group and team wise.

Sure, the ‘why’ and a vision on the ‘where-to’ need to be clear, but not so clear that they’re spelled out. Organizations will shout out for clarity, but it’s a major pitfall to offer it. As soon leaders or advisers do this, the system leans back, waits for instructions and stops using their own cognitive surplus.

Our company, Forzes, been through a process like this multiple times. Not only with our clients, but as a non-traditional network organization ourselves. There is simply no guidebook, no manual to go where we dream to be.

Is fusing organizational development and learning easy? Heck no. Resistance is major, up until the point where the system learns of the first results. Until the moment all involved discover that conditions need not be perfect in order to achieve. Until we all accept that we fumble along, that we’re all vulnerable and uncertain how to address our work and life.

(and for now: please read a comma, rather than a point. This story continues in part two, to be published in three weeks: “pay-it-forward instruction”)